The store will not work correctly in the case when cookies are disabled.
We use our own and third-party cookies to improve our services, personalize your advertising and remember your preferences. If you continue browsing or click on the accept button on this banner, we understand that you accept the use of cookies on our website. For more information visit our Cookies Policy ACCEPT DENY

Known as the 'cotton cashmere', our soft cotton collection of bed linen and nightwear is born from a history of intertwined traditions. In the 18th century, the Nepalese princess Damber Kumari lived temporarily in Benares. This is a holy city in India with a rich history in fabrics. During her stay she became acquainted with the Indian art of block printing on cotton. When she returned to her native Nepal, she further developed this technique. Because of the colder Nepalese climate, she sewed two layers of fine cotton (voile) on both sides of the printed fabric. The three layers were found to regulate heat, make the garment breathable, soft to the touch and pleasing to the eye. The two layers on the outside were so thin that the middle layer remained visible. This type of fabric was mainly used as a shawl and is also known as Damber Kumari Khasto. 'Khasto' means 'scarf' in Nepali and there is also the Pashmina Khasto and the Dhaka Khasto for example. In India, the three-layer scarf is known as 'dohar'.

In the late 1990s, an Indian friend of Gon Uppal (the mother of current owner Rahul) gave her a Nepalese Damber Kumari Khasto as a gift. Gon, an admirer of fabrics, felt inspired. With her own Mughal era inspired prints and a fine voile, she designed a new collection of nightwear, children's and baby clothes, accessories, bedding and meditation wear. Gradually, we and our customers have come to call the three-layer material the 'cotton cashmere', because the cotton has a softness that is reminiscent of cashmere.

In addition to the collection made of this fabric, we have an annually changing blockprint collection, which is printed entirely by hand (block print). 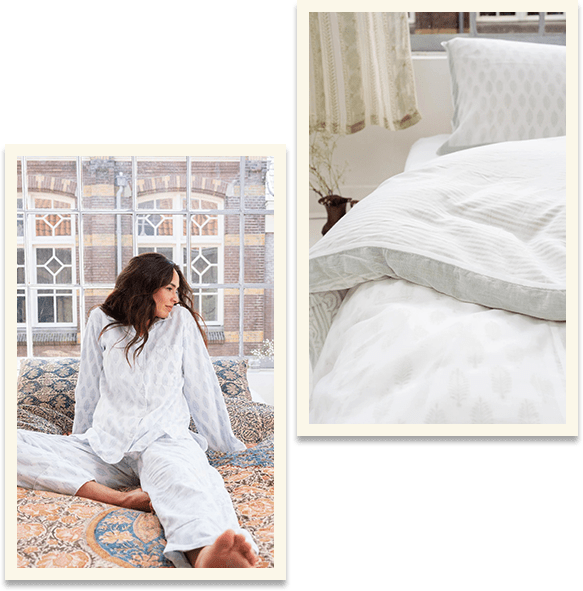