The store will not work correctly in the case when cookies are disabled.
We use our own and third-party cookies to improve our services, personalize your advertising and remember your preferences. If you continue browsing or click on the accept button on this banner, we understand that you accept the use of cookies on our website. For more information visit our Cookies Policy ACCEPT DENY 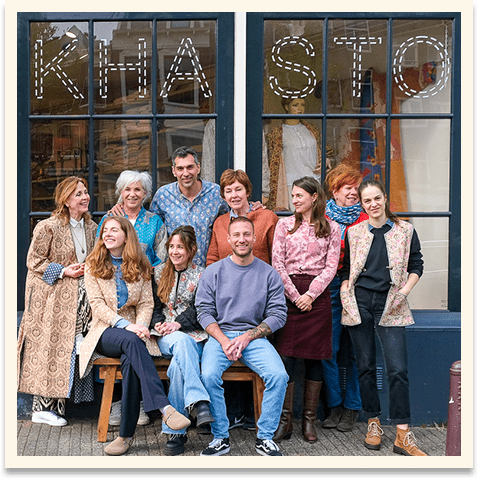 Khasto is an Indian-Dutch family business that has its origins in the 1980’s when Aldegonda Uppal founded her store and wholesale 'Evenaar' (‘Equator’) in Bergen op Zoom. Two decades later, this company grew into the beloved store 'Bloom' on the Prinsengracht in Amsterdam. Her son Rahul, who started the website Khasto.com in 2007, also leads the store since 2018, when it was named 'Khasto'. Khasto is also delivers to various stores in The Netherlands and abroad, the locations of which can be found at the bottom of our web page. Our Dutch Khasto team consists of Mileid, Julia, Carla, Hetty, Jasmijn, Stefan, Tara, Tess, Charlotte and Rahul.

But this team is only a part of Khasto. We would not be able to exist without the close ties with various local suppliers and artisans, especially from Rajasthan, India, with whom we work with for decades. Their craftsmanship, from cutting the blocks, the dyeing and printing of fabrics, to the cutting & stitching, is what brings the collection to life.